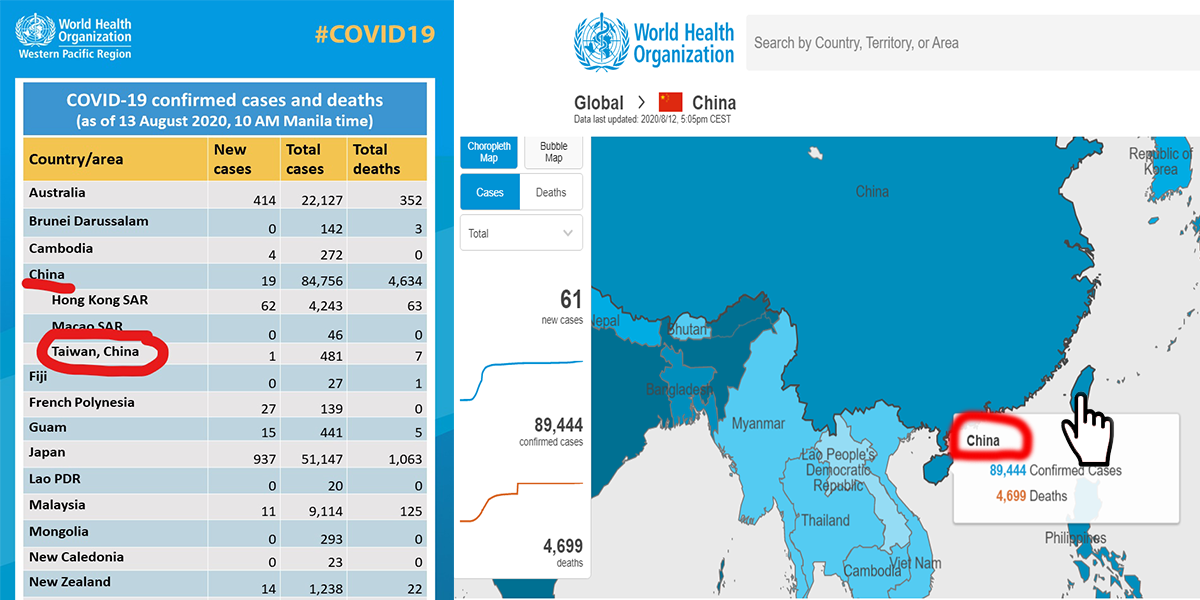 So Observers…… I have just been triggered…. call me a snowflake if you want, whatever floats your boat. I just saw a post in our TO – News from Taiwan group that got me miffed. This isn’t some “BREAKING NEWS” but I wanted to talk about it. Here we have some images of coming from the WHO, specifically World Health Organization Western Pacific Region, in which they mark Taiwan as “Taiwan, China”. In my eyes, unacceptable!
Taiwan has done exceptionally well at keeping the pandemic from ravaging our society like so many other countries have experienced. Yet we still get pushed to the side by the WHO, which is supposed to represent the world, but then excludes 23 million people. The US was right to leave the organization, the WHO is a joke.

This got me thinking how does China still make this happen? They barely occupied the island (never having full control) before giving it up to Japan in perpetuity. The island then declared independence as the “Republic of Formosa” before the Japanese came to invade making us their first colony. [our up coming book will explain more, stay tuned for that]

The way this happens is through the buying of developing nations votes in UN organizations with massive loans and debt traps by China. That’s how China gets away with this nonsense. They basically tell these nations that they have to vote the way China votes and will punish them if they don’t. China often speaks of retribution to countries that don’t want to play their game. Now for a developing nation with little money and massive debt to China that threat is very real and can push them to do things that might not ideologically agree with, like excluding Taiwan from the WHO.

This aggressive diplomatic policy isn’t sitting well with countries all over the world and will have a bad end for China and their emperor if they continue on the path. But authoritarian regimes don’t have much other choice do they? They have to keep their people obedient and distracted. Causing problems and the blaming it on the outsiders is a go to in the authoritarian play book. We will have to wait and see how long they can keep it up.

Ok rant over. Back to your lives!